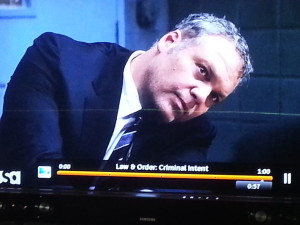 Television true crime and police procedurals are preferred. Detective Joe Kenda is a recent favorite. I enjoy Castle very much. I used to like Law & Order until it became a political soapbox. I am still a fan of D’Onofrios’s portrayal of Bobby in L&O Criminal Intent. Characters drive drama, especially when you have a great villain to battle on equal grounds, like Bobby and Nicole.

I’m also a longtime fan of Criminal Minds and NCIS.

I was an all-time fan of The X Files and an old time favorite was The Twilight Zone. The Sopranos was a no miss show. There was a time I really liked sit-coms like Seinfeld, Cheers and Fawlty Towers to name a few.

Movies are more about suspense and adventure thrillers with classics and noir movies. I still like black and white classics. Most anything with Humphrey Bogart in it. Again it’s the strength of a character that drives any story.

Almost anything Hitchcock made gets my attention. Recent movies that might draw me to a theatre are the big screen impact shows like Jurassic World. I can’t honestly say the movies today don’t have that much draw for me, although I like it when friends offer recommendations (recently Nightcrawler).